Was Kurt Cobain killed? Courtney Love files cease and desist order to theatres attempting to show new controversial film, 'Soaked In Bleach', that says he didn't kill himself. (Warning: This is an opinion piece) 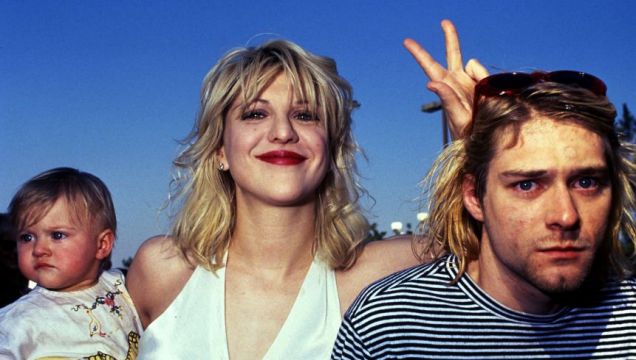 Twenty one years ago the world and myself watched in paralysed awe as the body of 27 year-old rock star Kurt Cobain was wheeled into an ambulance on national news media. Seemingly dead from self-termination, the victim of a self-inflicted gun shot wound, Kurt Cobain was the cliché to end all clichés - Dead at 27, inducted into the heroin and drug-abuse laden halls of rock star fatality and placed upon a pedestal as the 'voice of a generation' forever. We all know the story by now. Fans held public eulogies, the media went into overdrive and the mythology of a tortured rock star 'overwhelmed by fame and depression' was solidified forever. Or so we thought.

Books, documentaries and films were made in the aftermath of the devastation, all prying and probing to fill collumn inches and find answers to the private motivations and meditations of this enigmatic genius, chief among them Nick Bloomfields fascinating and revealing documentary 'Kurt and Courtney (1998) that showed a man by the name of El Duce claiming to have been offered $50,000 to murder Kurt Cobain (which almost single-handedly created the 'Courtney killed Kurt' sub-culture found on the Internet to this day). And though those that proselytize 'foul play' have been hand waved away as 'conspiracy nuts' by the mainstream media ever since, a new film has emerged that may change their tune. 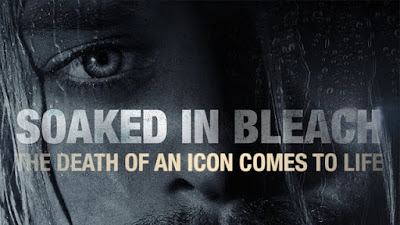 The docudrama film 'Soaked In Bleach' was released two weeks ago in a bid to shed new light and add urgency to the ongoing debate over the, some say, shady circumstances of Kurt Cobains death.The film attempts to showcase new evidence and testimonials from 'police chiefs' and 'forensic pathologists' giving growing credence to the, once thought of, 'tin foil hat', obsessive fan speculations on Courtney Love, and her possible involvement in his death.

You may be asking these questions about now...

“But, isn't this just the latest in a long line of cynical, rehashed Kurt Cobain cash-in movies trying to milk the last remnants of milk from a dying media 'cash cow' ?”

“Is this defamation by a vocal, fanatical minority looking for someone to blame after a tragedy?”

“Why do I even give a fuck about a dead, self-loathing beta man and his gorgon-esque junkie wife?”

..is it a genuine and thought provoking documentary, spurred by the unrelenting vigilance of a private investigators obsession with justice, buoyed by the surprisingly overwhelming body of evidence that he found which cannot help but cast real doubt over the official account?

After watching this revealing film, it's pretty damn hard to refute.

Well, let's just say this - Courtney feels moved enough - nay, threatened enough - to have issued a cease and desist order to every theatre attempting to show this film, no doubt in an effort to intimidate and silence this narrative from re-emerging in the media.

The film has some pretty good game to back up it's claims and most of those claims are centered around the work of one Tom Grant, a former county sheriff turned PI (Private Investigator) hired by Courtney Love, in the preceding days leading up to Kurts death to track him down and expose his whereabouts (after Kurt fled a rehab facility and went off the radar). Only things didn't pan out how he expected a typical track-down to pan out.

Sent on a trail of misdirection and incongruous, sometimes bizarre red herrings, Tom soon realised that Courtney was not being quite as open and honest as a wife looking for her 'suicidal' husband might be. It seemed like he was deliberately being sent on a wild goose chase, to locations counter-intuitive to logic, and in his vacillation decided to document every single minute of conversation he had with Courtney, over the phone, to tape. Those conversations are the backbone of the film, with talking heads, dramatisation, hired actors and actresses to flesh out those telephone liaisons and private meetings for the viewer. It has to be said, the direction, acting and cinematography really hold this film together as a compelling piece of cinema in its own right.

The film soon delves deep into the twisted, seedy noir-esque minutiae of the case from the outset, tying together the complexities and inconsistencies (and there are a lot) of the crime scene, the accounts of Seattle Police Department members and the chronology of events leading up to the bodies discovery by an electrician on 8th April 1994, and after.

It also challenges the media disseminated perception of Kurt’s mental state and psychological profile, as a manic depressive man-child, walking around in a perpetual state of self-loathing, a general malaise brought about by chronic stomach ailments and constantly balancing on the verge of suicide.

Childhood friends testimonial, close friends who knew him best at the time, interviews from TV archives showing Kurt express how happy he was with his new medication (to quell his stomach pain) and his recent fatherhood, all contradict this media generated tragic personae. It even goes deep enough to question myths surrounding the, oft repeated, Cobain familial history of suicide (Courtney called the 'suicide gene') in bolstering this claim of a man tied to a biological pre-destiny to kill himself.

It turns out his three uncles that died were better candidates for the Darwin Awards, dying from drunken mishaps and freak accidents involving dropping a loaded gun in a public bar rather than being the victims of a natural proclivity to end their own lives (unless you count a combination of stupidity and bad luck as being pre-determining factors). But, none the less, Courtney perpetuated this myth in interviews ceaselessly in interviews following the tragedy.

Here are 10 questions I'd like answered after watching this film:

1) Was she involved in some way?

2) Did she hire someone to kill her husband and stage it as suicide?

3) Did she have motive in killing Kurt due to his filing for divorce (which, due to a less than favourable pre-nuptial, would have cost Courtney potential millions)?

4) Why were there no legible fingerprints on the weapon and why did it take 4 weeks for the murder weapons prints to come back and be examined?

5) How could he have lifted the shotgun when toxicology says he was 3-4 times over the overdose    limit of a hardened heroin user (and therefore would have been too incapacitated to pull the trigger)?

6) Why was the verdict of 'suicide' given on the day of discovery (only 54 minutes after they found  him)?

7) Did she write and forge the second half of the note for it to appear like a suicide note? (Watch this eerie short film detailing how Courtney did it using a traced practice sheet of Kurts alphabet found in her bag by her lawyer, Rosemary Carroll)

8) Does it even read like a suicide note or was he just quitting the music business for a while, as supporting accounts suggest?

9) Why did she consistently send Tom Grant in the opposite direction to Kurt, conceal information, lie and fail to mention the room above the garage during the search to find him?

10) Why is the case not being re-opened with an independent enquiry in place of and in light of possible police corruption?

The questions this case offers are ceaseless and the circumstantial evidence seems to never end. So much so, that, it all feels like the makings of a sensational true 'Hollywood Murder Mystery' (add more drugs and less glamour) spliced with the tailor made headlines of The National Inquirer and mixed in with the 'Cluster-B' character profiles and deception of 'Gone Girl'. You couldn't make it up if you were Elmore Leonard. And though there is no direct evidence to implicate anyone in a conspiracy, the official, lacklustre account of what transpired in April 1994 has lead enough people to draw other, more nefarious conclusions about what transpired.

You've probably guessed by now, it's a really deep complicated rabbit hole of artefacts to smoosh into one post. All I can say is, go watch the film, go to Tom Grants website or read Tom Grants PDF 138 page case file. Ultimately, decide for yourself.

It's up to you how crazy you are for detail, but if the growing number of people on social media are availed for their efforts, the Seattle Police Department will be pushed to re-opening this case a third time (or ceded by an independent enquiry) and, eventually, get their day in court.